The partnership between Qualcomm and Iridium will turn most smartphones equipped with Snapdragon 8 Gen 2 into terminals capable of sending satellite emergency messages. If the approach is similar to Apple integrated into the iPhone 14, the choice of satellite partner may favor Qualcomm.

“Wherever you are in the world, if you see a little piece of sky, you will be able to communicate.” That’s the promise of Qualcomm’s vice president of satellite technologies, Francesco Grilli. At CES 2023, it unveiled the upcoming arrival of this technology in Android smartphones. Thus, in September 2022, it responded to Apple, which launched the era of emergency satellite communication with the iPhone 14.

If Qualcomm is coming after Apple in the race, it is because of the processor launch schedule, which will be the first to launch its SoCs at the end of the year. However, Qualcomm’s “delay” is only in the announcement and the availability of software for services: this year, most of the high-end Android terminals that integrate Snapdragon 8 Gen 2 chips are already compatible. But a key difference separates Qualcomm’s technology from Apple’s: the choice of satellite partner. 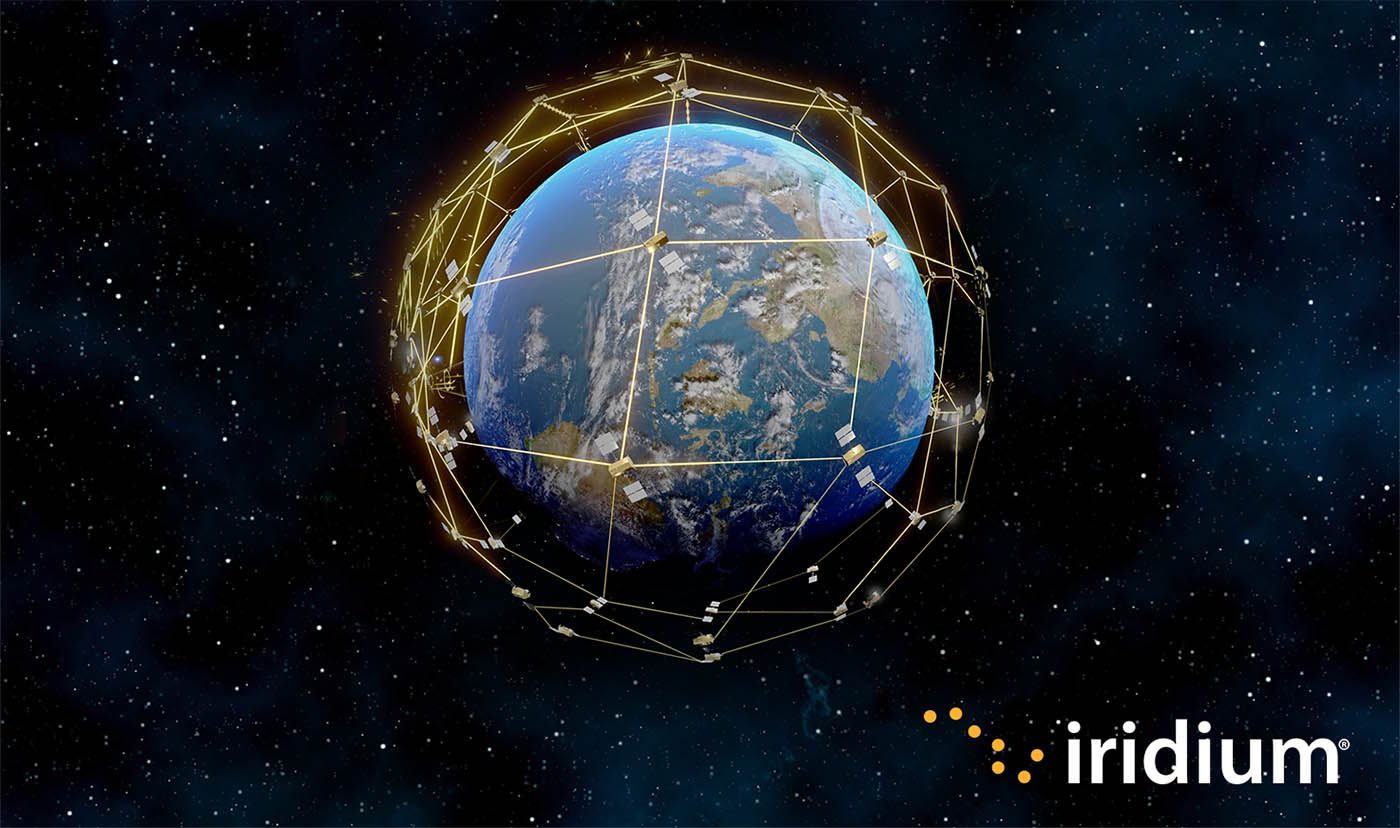 Unlike Apple, which signed a deal with Globalsat, Qualcomm turned to another satellite specialist, American Iridium. Heavy industry in the field of Kim is nothing less. All professions that really involve thinking outside the box – mountaineers, humanitarians, researchers, journalists in conflict zones, government officials, etc. – will likely be equipped with a satellite phone. It is generally a terminal based on the Iridium network for the main strength of this network: its universal nature.

Because from the North Pole to Point Nemo in the Pacific Ocean, as soon as a patch of sky is available, a terminal compatible with the Iridium network can effectively send and receive messages – bidirectionality will also be the order of the day with smartphones. This is not the case with the Globalsat network. The reason lies in the technical design of the two networks. Although Globalsat depends on ground relays (several dozen on the planet), Iridium is a constellation that encompasses intersatellite communications.

In addition, Iridium’s greater number of satellites at lower altitudes (66 + 9 spares versus only 24 for Globalstar) facilitates communication even in the deepest ravines or canyons, where Globalsat would have more difficulty. Note that this doesn’t disqualify Apple’s offering (read “Apple asset” below), whose service is already perfectly suited to casual use deep in the Atacama desert — if the service eventually becomes available in Chile. But the wildest explorers will inevitably choose Iridium over Globalsat.

Everywhere, for all 100% Qualcomm smartphones (but not for all customers) 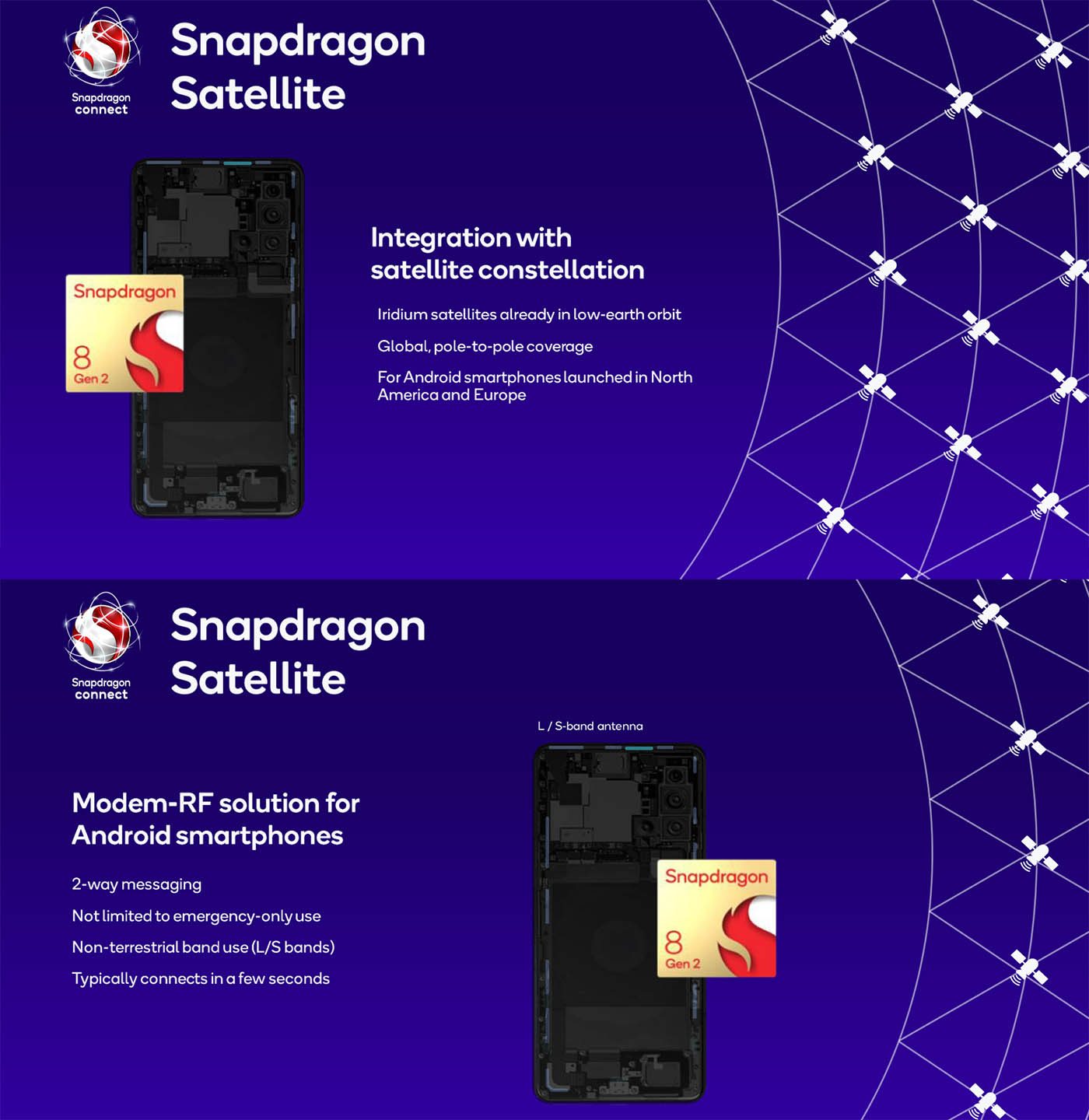 The good news for those planning to buy a high-end Android terminal this year is that the terminals should be 100% compatible with satellite connectivity. Why is the conditional used? Because it has two limits: technical and legal. ” The terminal must use our latest generation RF antennas to be able to take advantage of the service “, explains Francesco Grilli. If the brand uses another provider, this will not be possible: the X70 Snapdragon 8 Gen 2 modem needs these antennas. Although it is rare for brands not to buy the complete technological platform, it can happen. It will be difficult to easily verify the information, because several datasheets detail the type of RF antenna used!

Then the legislation of the country where the terminal is purchased must allow this type of use. “ Countries like India or China do not allow satellite services. Therefore, the native software will not allow you to use it. However, all compatible devices purchased in Europe or North America will be able to do this. And they will work anywhere on the planet “, Mr. Grilli added. On paper, Qualcomm appears to have some technological advantage. But, as is often the case, Apple holds several cards.

Globalstar does not, as far as we can see, offer the total and global coverage of Iridium. Second, the network depends on a limited number of ground stations. Because the satellite world – Iridium, Inmarsat, Globalstar and Thuraya – is small and makes little money. Without the “freedom” side that an actor like Space X could represent, all releases are controlled. Apple knows this all too well. There is no doubt that the American giant has decided to put its hands in its pockets to strengthen the network.

That’s why Apple was so insistent on communicating around the feature after the iPhone 14 launch to talk about its investment in the system. Thus, the American will spend 450 million dollars over five years to strengthen the network of ground stations. First in the US (first market where the service is available) in Hawaii, Alaska, Florida, Nevada or Puerto Rico. If Iridium’s universality really needs few people, many American states remain fairly desolate, wild, and sometimes poorly equipped with network infrastructure. Therefore, Apple’s solution seems already suitable for a wider audience.

Finally, on the integration side, Apple will stand out, because the service (as always with Apple!) is thought out from A to Z. Pre-recorded messages in the terminal (which automatically include GPS location), software integration, ease of signing up for a protection plan when the time comes – currently two years free, and only time will tell what Apple decides – and more. Everything is already in place in America.

In order to compete with Apple, Qualcomm’s Android partners will have to create not only a software offering from scratch, but also a technical and commercial offering tailored to each of the countries where the devices are sold. Completions are generally the Achilles heel of Android terminals. Let’s hope Qualcomm has already laid the groundwork for its partners, otherwise it’ll probably have to wait a while to really tease Apple with its space-leading solution.